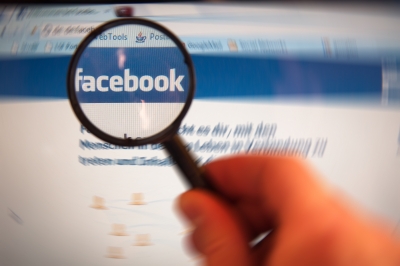 In Germany, the internet is present in every aspect of our daily lives. Almost 90 percent of Germans are now online, but only about half use social media. So it’s important to understand that digital campaigning doesn’t only mean using social media to communicate. In Germany, you must get your message into inboxes to succeed. 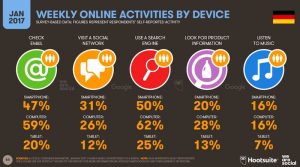 2. Know your device, and communicate across all channels.

Between desktop devices and mobile devices, Germans, on average, are online six hours a day. But to underscore the first point, they typically spend just one of those six hours on a social network. For Germans, checking emails and doing daily work happens on a desktop device, while social media activities are done using a mobile phone. Online search occurs via a mobile device about 50 percent of the time, but two-thirds still use a desktop device. Germans expect to be addressed through all channels and on different devices.

The share of social media users in Germany is above the global average – 41 percent to 37 percent. 33 Million people in Germany use social media platforms at least once a month. Facebook and Youtube are the leading platforms. Almost every social media user (33 million users total) visits their Facebook profile at least once a month. 64% are visiting on a daily base, and 85% use their mobile device. Only YouTube beats those numbers. 69% of social media users visit YouTube every day, though they have a more passive network and content strategy than for Facebook. Given the number of daily interactions on Facebook, it’s ranked second, followed by WhatsApp at 55 percent. The social platforms that often get the most buzz—Instagram, Twitter and Snapchat—are definitely less popular. Only 21 percent of users visit Instagram daily, while 19 percent visit Twitter daily, and just 10 percent for Snapchat. 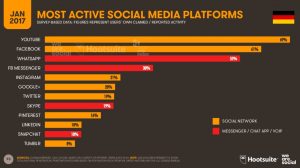 These lesson from these numbers is clear—smart digital campaigning in Germany must serve at least four channels: YouTube for video and entertainment, Facebook and WhatsApp for interaction and communication, and Twitter (often called the elite channel), to reach out to top-ranking politicians and journalists.
If you want to invest resources beyond those core channels, look to Instagram and Snapchat. Here you are attracting a younger audience. These channels also require a different kind of storytelling in the context of digital campaigning.

Worldwide, Facebook is the top performer when it comes to Social Media. More than 1.8 billion users are active on Facebook every month. More than every second person (55%) uses Facebook every day. In Germany, of the 64 percent of people who are daily Facebook users, 48 percent of them are female, while 52 percent are male.

At the first glance the breakdown shows that there is huge campaign potential: The clear majority of Facebook users are between 18 and 34 years old – 16 million in total. But there are around 7.1 million first-time German voters on that platform. About 9 million Germans (older than 45) are regularly on Facebook. And as older voters are more reliable, the 3.6 million Germans, (older than 55 and active on Facebook) are very attractive to digital campaigners. But of course the strategies for approaching first-time voters and Silver Surfers must differentiate in each case.

The 2017 survey also shows that television is still the most important video channel for Germans. Even with Netflix and Amazon Prime, 89 percent of Germans still depend on daily TV. At the same time, digital viewing is growing. 25 percent of Germans stream videos online every day. And almost 60 percent of Germany’s internet users watch at least one video online a month. But this is only the demand side. Gifs and small snippets of video are dominating social media channels like Facebook and WhatsApp.To create content that gets shared far and wide, digital campaigners must pay more attention to short, emotional online clips, which connect compelling content to their brand.

Those five trends will be critical for digital campaigners to grasp this election year. There remains plenty to write about targeting and big data. Also, the connection between online and offline has become more important.

Online fundraising is becoming more of a possibility in Germany as well. Using E-Commerce’s development in Germany as an indicator of the development of online donations, there’s light at the end of the tunnel. The more the internet spreads, the more people are using E-Commerce. Online shopping is already widespread in Germany – only the British and South Koreans are more pervasive shoppers. 72 percent of all German Internet users bought something online last month, so online fundraising will continue to develop.

This article has been published in Campaigns&Elections Five Trends .

Digital in 2017: Western Europe from We Are Social Singapore